Further Reflections on the Limitations of Verbal Language

In The Hitchhiker’s Guide to the Galaxy, Douglas Adams’ brilliantly humorous sci-fi novel, there is a hilarious sequence in which, right after the earth has been demolished by a hostile alien force, the sole survivor of the planet finds himself stranded on an alien spacecraft. He is in the company of an extra-terrestrial who happens to be a field researcher for The Hitchhiker’s Guide to the Galaxy – an electronic guidebook of sorts for adventurous explorers of the universe. Deeply traumatized by the utter destruction of his home planet, Arthur Dent, the sole survivor, looks up what the guidebook has to say about the earth. He is outraged by what he reads on its electronic screen:

“What? Harmless ? Is that all it’s got to say? Harmless! One word!”

In response, Ford Prefect, the unusually named ET researcher of the galactic guidebook, casually shrugs his shoulders and replies:

“Well, there are a hundred billion stars in the Galaxy, and only a limited amount of space in the book’s microprocessors,” he said, “and no one knew much about the Earth, of course.”

Arthur Dent, the last human survivor of the smoldering ruin that used to be planet Earth, replies:

“Well, for God’s sake, I hope you managed to rectify that a bit.”

“Oh yes, well, I managed to transmit a new entry off to the editor. He had to trim it a bit, but it’s still an improvement.”

“And what does it say now?” asked Arthur.

That is a sobering thought, emerging from author Douglas Adams’ witty imagination – the idea that all that might remain, one day, of so many millennia of human civilization – of all its artistic and technological accomplishments, of its glorious empires, concrete constructions and majestic steel towers – might be the words “Mostly harmless” in some alien galactic guidebook! But how far is this observation from the truth about the world as we know of it even today?

The words we use to describe the world around us – all words, in fact – are essentially labels. They are symbols that represent – and, in the bargain, simplify – a more complex underlying reality. Words, by their very nature, obfuscate reality as much as they clarify it, and conceal as much as they reveal. For instance, you can always add more qualifying words to elucidate the context of any word. A car may be more accurately described as “a blue car” and, drilling down even further, as “a blue Tesla four-door sedan.” This process of verbal elucidation is infinite, because the underlying reality described by these words is infinitely complex.

Because you can always add more words to elaborate on any word, it follows, logically, that all words are simplifications of reality – all words are, by their very nature, inadequate. One can never capture the full detail and complexity of the underlying reality in any communication. At some level, one is always simplifying in one’s representation of reality, no matter how detailed or complex one’s communicative symbology – or language – might be. In fact, one of the principles of good writing in the modern era is that simpler is often better. The subtitle of this article, for example, might have been more effective if it were simply: More Thoughts on the Inadequacy of Words – except for the fact that I would have lost the opportunity to reflect on that point in the course of my reflections!

In truth, no one can fully comprehend the emotions or experiences of another unless one relived the exact same experiences and emotions in the exact same context – in other words, the identical historical setting and life story or back story – as the other. As such, all communication is a generalization or simplification at some level – even telepathic or empathic communication. The only question, here, is: at what level are you generalizing or simplifying the events, circumstances, experiences or descriptions that you are attempting to communicate?

The episode I cited above from Douglas Adams’ novel makes one wonder about the history books. What has been left out? What has been overlooked? What should have been included, but wasn’t? And, finally, what has been overstated? Can it be said that what we read as history today is the equivalent of the “tabloid journalism” of the past? And will future generations form their assumptions about the history of our times from surviving copies of the National Enquirer?

If one considers the history of a random hypothetical remote village in the middle of Borneo, for the sake of argument, it is apparent that none of the events in all of the thousands of years of its existence have, in all likelihood, even been remembered by the locals, let alone been recorded in their annals or chronicles, or included in modern history textbooks! But even so, one must wonder why these forgotten events are any less historically relevant than the events that have been included in history – events such as the Fall of the Roman Empire, the French and American Revolutions, the Napoleonic Wars, and so on.

History is a set of lies agreed upon.

In his rather cynical estimation of the significance of history, the famed Corsican general and erstwhile emperor of France, Napoleon, appears to suggest that history is, ultimately, no more than a subjective cultural narrative, as opposed to objective scientific facts. They are narratives that have been and continue to be perpetuated by certain interested parties for whatever reason, more than likely, political in nature. The circumstances from which history arises and is recorded certainly suggest that this may be the case.

In the study of literature, there is the concept of the “space between words” – of what is left unsaid or unspoken in any verbal communication. It is the realm of subtext and the connotative meanings of words – to “reading between the lines” – the missing details, the omissions, the overlooked substance or filler material in between the printed, legible text. Why are certain details omitted from any given text while others are included? Do the inclusions and omissions change the tenor of the text? Do they subtly – or dramatically – modify the meaning of the text? Do they adjust one’s concept of reality as perceived through the lens of the text in question?

The illustrious English Renaissance playwright William Shakespeare coined or invented nearly two thousand new words and phrases in the English language through his literary usages. This clearly suggests that he found the language and vocabulary of his time to be woefully inadequate for his needs. Shakespeare’s original coinages were so vivid and effective that the words and expressions he invented survive to the present day – otherwise, we would all likely be speaking the language of Chaucer, to a large extent!

Shakespeare’s Hamlet, as portrayed on screen by actor Laurence Olivier

In Hamlet, his most widely recognized play, Shakespeare comments on the futility and hollowness of words:

POLONIUS: What do you read, my lord?

POLONIUS: What is the matter, my lord?

POLONIUS: I mean the matter that you read, my lord.

Clearly Shakespeare is reflecting on the emptiness of words – not just in the sense that words are no replacement for action, but also in that words are inadequate to describe reality. For Hamlet, words appear to be insufficient to describe his experiences and overwrought emotional state. For Shakespeare, meanwhile, the vocabulary at his disposal clearly did not measure up to his needs for self-expression, which is probably what compelled him to coin nearly two thousand new words and phrases in the language!

The celebrated American writer Ernest Hemingway reveals his distinctive genius in his written works in a very different way. Hemingway’s writing style is simple and direct. He avoids using adjectives and, instead, focuses on the use of direct nouns:

Hemingway puts his emphasis on nouns because, among other parts of speech, they come closest to things. Stringing them along by means of conjunctions, he approximates the actual flow of experience.

Hemingway’s deliberate use of broad verbal strokes to paint his descriptive picture of reality clearly points to the inadequacy of words. He leaves it to the reader to fill in the empty spaces from their own life experience and imagination rather than engage in lengthy or complex descriptions, psychological analyses, parenthetical statements or asides. The deliberate tactic of using highly simplified linguistic formations points to that which is left unsaid – deliberately omitted – because, perhaps, there are no words adequate to describe that which is unspoken.

Another writer, famous for his deliberations on the vocabulary and structure of the English language, is George Orwell. His works have recently enjoyed a dramatic resurgence in popularity, thanks to the current political climate. Orwell, a.k.a. Eric Blair, was a contemporary of Hemingway – in fact, he fought in the Spanish Civil War against the forces of Fascism, even while Hemingway was covering the war as a correspondent for the North American Newspaper Alliance.

In his widely read essay Politics and the English Language, Orwell describes the use of “political language” – how politicians use language to obfuscate, confuse and deceive the public in a number of ways, including the use of euphemisms and vague statements. Interestingly, Orwell also comments on how language not only reflects the current condition of the society from which it emerges, but can be instrumental in shaping, even redeeming, society as a whole.

Orwell’s most well-known critique of language and vocabulary is in his novel Nineteen Eighty-Four. In this seminal literary work, Orwell describes how the ruling party of the totalitarian state described in the novel controls the hearts and minds of the public by altering the definitions of words in popular usage and by rewriting the narratives of history.

But where did that knowledge exist? Only in his own consciousness, which in any case must soon be annihilated. And if all others accepted the lie which the Party imposed – if all records told the same tale – then the lie passed into history and became truth. ‘Who controls the past,’ ran the Party slogan, ‘controls the future: who controls the present controls the past.’ And yet the past, though of its nature alterable, never had been altered. Whatever was true now was true from everlasting to everlasting. It was quite simple. All that was needed was an unending series of victories over your own memory. ‘Reality control’, they called it: in Newspeak, ‘doublethink’

These processes of redefining popular words and rewriting popular history have become some of the distinctive practices engaged upon by 20th Century totalitarian states, including Maoist China and the Stalinist Soviet Union. Perhaps, echoes of these processes still continue in the media and cultural landscape of the present day. Widespread censorship, cancel culture and historical revisionism prevalent in culture and academia these days have a distinctively Orwellian undertone.

Words, after all, are the ultimate tool of deception – which is why the mastery of words is so important for lawyers and politicians! Because words are double-edged, in that they have the potential to obfuscate and clarify simultaneously, both revealing and concealing the truth, they must be approached with caution. Reading the “fine print,” reading “between the lines,” reading non-verbal cues, understanding context and subtext, along with the denotative and connotative meanings of words – are all practices critical to effective reading, comprehension and communication.

In essence, short of achieving empathic, telepathic non-verbal communication with others, we must learn the skills associated with effective reading in order to communicate thoughtfully and well and avoid the sort of absurdly nightmarish scenarios that have become commonplace in the news cycle these days! 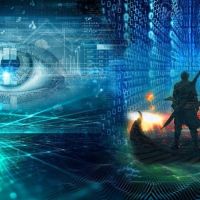